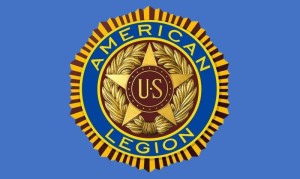 Our Post held an  Unserviceable Flag Ceremony on April 7 at Disbrow Park.  The ceremony was conducted by Commander Fred de Barros who was assisted by Post members Gene Collins, Tom Seaver and Hal Schwartz.  Many thanks to the Rye Fire Department for assisting with the ceremony.   We retired many flags from residents who had deposited the flags at  our collection box at City Hall. 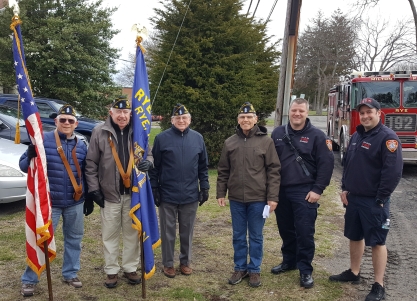 The Ceremony for Disposal of Unserviceable Flags is outlined in Resolution No. 440, passed by the 19th National Convention of The American Legion in New York, Sept. 20-23, 1937. The ceremony has been an integral part of American Legion ritual since that date. The resolution reads as follows:

WHEREAS, Americanism has been and should continue to be one of the major programs of The American Legion; and

WHEREAS, The observance of proper respect for the Flag of our country and the education of our citizenry in the proper courtesies to be paid the Flag is an essential element of such Americanism program; and

WHEREAS, It is fitting and proper that Flags which have been used for the decoration of graves on Memorial Day be collected after such service, inspected, and worn and unserviceable Flags be condemned and properly destroyed; and

WHEREAS, The approved method of disposing of unserviceable Flags has long been that they be destroyed by burning, but no ritual for such destruction or ceremony in connection therewith has been adopted by The American Legion or included in its official manual of Ceremonies; therefore be it

WHEREAS, Our Flag which we love and cherish

WHEREAS, In a proper service of tribute and memory and love, our Flag becomes faded and worn and must be honorably retired from life; and

WHEREAS, Such retirement of Flags that have become unserviceable may be done in public with respectful and honorable rites: therefore be it

RESOLVED, That The American Legion in convention assembled at Chicago, Illinois, September 18-20, 1944, urge that the National Headquarters use all means to foster and promote through the proper channels, the greater use of the official American Legion Ceremony for the Disposal of Unserviceable Flags as outlined in the Manual of Ceremonies; and be it further

RESOLVED, That Flag Day, June 14, be recommended as the most appropriate day on which to annually hold this ceremony.

A set of rules of civilian flag courtesy popularly known as the Flag Code was first formulated by the National Flag Conference meeting in Washington, June 14-15, 1923. The Flag Code was an attempt by prominent patriotic organizations to collect together in one instrument statutes, executive orders, and rules of established custom and usage relating to the U.S. flag. On Dec. 22, 1942, the 77th Congress approved Public Law 829, giving official sanction to most of the provisions of the Flag Code. This public law established the Flag Code in Title 36, U.S. Code, Chapter 10, Sections 173-178, including the Flag Code § 176(k) on disposal of unserviceable flags.

We are of the opinion that The American Legion’s Ceremony for Disposal of Unserviceable Flags is a dignified tribute to the U.S. flag and to its symbolism. We therefore conclude that this ceremony is both legal and proper, and that it is an effective instrument for promoting enhanced respect for the U.S. flag. Following is the entire ceremony as it appears in the “Manual of Ceremonies.” We encourage your use of the ceremony on Flag Day, June 14, on an annual basis. By doing so, you will enhance respect to the flag in your community and provide a much-needed service to those who have flags needing to be retired.