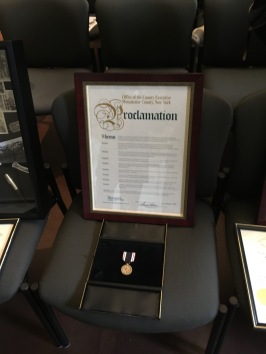 Rye resident Thomas DeCaro, a WWII veteran,  was presented his POW medal by US Congressman Elliot Engel and County Executive George Latimer on Wednesday,  September 12 at Rye City Hall. Mr. DeCaro was represented by his family due to his inability to attend the ceremony.

Thomas G. DeCaro  was born on July 2, 1921 to Nicholas and Mary DeCaro, here New York. He attended public high school in the Bronx and upon graduation joined the United States Army. Within the first year of being in the Army, Japan, bombed Pearl Harbor and the United States entered World War II. At that point he transferred from the field artillery into the U.S. Army Corp to commence pilot training. He was commissioned as a Second Lieutenant and promoted to First Lieutenant. He was assigned to a B-17 squadron that was flying out of the United Kingdom and bombing sites in Germany. At this point in the war there was no fighter aircraft cover to escort the B-17’s during bombing missions and proximally 50% of his squadron was shot down during each mission. He made his first mission in May or June of 1943. His second mission was on June 13, 1943 and his plane was shot down over the Danish Peninsula. He was wounded in the attack by German fighters and knocked unconscious. When he awoke, the plane was on fire and spiraling torts of Baltic Sea below. He made his way to the bomb-bay area of the aircraft where he found the pilot hung up on the bomb-bay rack and that the rest of the crew had already bailed-out. He assisted the pilot and getting free from the bomb-bay rack, and he and the pilot successfully bailed-out of the aircraft.

He landed waist deep in the water of the Baltic Sea off a Danish beach. It was a windy day, and before he could disconnect from his parachute it filled and dragged him out to sea. He was fortunate enough to be recovered by a local fishing vessel, who turned him over to the German authorities. Thereafter, he was provided with medical care and attention by the German Army and ultimately interned in several different prisoner war camps for the next 23 months. He was liberated from prison camp when General Patton’s 3rd Army pushed into the region where his final POW was located.

Upon return from the European theater his parents held a party to celebrate his safe return. At that time, his father was a machinist in the Brooklyn Navy Yard and he invited several of the women who were working in the Navy Yard as “Rosy the Riveter” to join the celebration. It was at this party that Thomas met Violet Lewis, who was a worker at the Brooklyn Navy Yard, and after a short courtship they married. They remained married until her  passing last April. At the time of her passing they had been married more than 71 years.