The roll of honor was read by Legionnaire Tim Moynihan.

Sally Rogol of the Rye Recreation department received the 2019 Americanism Award for service to community and veterans.

Robin Latimer, president of the American Legion Auxiliary sang the National Anthem and God Bless America. She was accompanied by Cub Scouts, Brownies and children from all around Rye.

Photos from the day follow the text of Terry McCartney’s keynote speech:

It is an honor for me to have the opportunity to address you today.  As I am no longer a public figure, these occasions are now fewer and much farther between for me.  Memorial Day and Veterans Day are significant holidays for me because everyone in my family served in the military or in other branches of government (State Department, FBI) so it means a lot to me to be involved here today and I thank my Legion brothers for the opportunity.  Fred told me I have 6 minutes to say something inspiring.  I will do my best, but I hope you’ll bear with me if it takes a minute or two longer.

First, thank you all for taking the time out of your holiday weekend to attend this Memorial Day ceremony and acknowledge those who have made the ultimate sacrifice for us.  I want start by reminding you that this is NOT a holiday for veterans or to thank veterans for their service.  We have that holiday in November.  Today is the day we acknowledge those men and women who never got the chance to be a veteran or to be thanked for their service.

Today is the day we thank them for making the ultimate sacrifice, though they can no longer hear us.  That’s why we’re all here right now.

A few weeks ago, I had another honor when I attended a memorial service at Arlington National Cemetery in Washington, D.C.  It was such a moving experience for me, I want to share some of it with you here today.  It was my first time there.  If you have seen the amazing sights of our Nation’s Capital like my favorites – the cherry blossoms in bloom along the Tidal Basin in the Spring, the nearby Lincoln and Martin Luther King, Jr. Memorials, the Viet Nam Veteran’s Memorial, the Air & Space Museum, or the Smithsonian, but you have never visited Arlington National Cemetery, I would recommend it to you.  It is a completely different experience than any other place in D.C. and a worthy addition to your American bucket list.  Visitors are welcome at Arlington National, so you need not be attending a memorial service as I was.  The Tomb of the Unknown Soldier is one of the many memorials there.  It is guarded 24/7/365 by the very impressive U.S. Army’s 3rd Infantry Regiment, known as the “Old Guard.”  President John F. Kennedy’s eternal flame also burns, even through rain and snow, at Arlington National.

Arlington National Cemetery first opened in 1864 and is a breath-takingly beautiful place that leaves you with a deep sense of awe and respect for the sacrifices that have been made for our country by its diverse citizens.  The 624 acres of Arlington National sit mostly atop high ground overlooking the Potomac River not far from the Pentagon.  The land once belonged to Robert E. Lee and his wife Mary Anna Custis Lee, who was the great granddaughter of Martha Washington, the first First Lady of the United States.  You can see most of the District of Columbia and the monuments from the vantage point of Arlington National.

I am here to suggest to you today that perhaps the most important monuments in Washington, D.C. are the NOT the 30 or so big ones made out of marble across the Potomac but rather the over 400,000 simple stone grave markers at Arlington National Cemetery.  I say that not to disrespect the monuments to great Americans like Presidents Washington, Jefferson and Lincoln or monuments such as the Marine Corps War Memorial which, to me, is the most inspiring statue in D.C. because it depicts six everyday Americans from diverse backgrounds, one a Native American, raising the flag atop Mount Surabachi on Iwo Jima after one of the bloodiest battles of WWII in which 7,000 Marines and 21,000 Japanese soldiers died.  Rather, I say that those 400,000 small markers are important monuments because they represent the lives of the everyday men and women of America that were cut short defending our freedom.

Those small white monuments represent husbands and wives, mothers and fathers, sons and daughters from small towns like Rye all over the United States.  Because of them, we wake up every day of our lives free to do whatever we choose to do: go to school (or not), go to work (or not), go to the beach or play golf or go fishing, go on a vacation, say whatever you want, do whatever you want…  If those lives had not been sacrificed during the many wars our service men and women have fought, the world would be a very different place today and you might not have those freedoms.  Almost 7,000 service men and women have died in combat since 9/11 so Memorial Day is not only about history.  There are service men and women deployed all over the world right now placing their lives at risk to make us safer here at home.

Some of them may not come home.

At Arlington National, the neat rows of simple white grave markers go on and on by the thousands in every direction against the green grass and rolling landscape of the old farm.  Today, a flag has been placed at each and every one of those 400,000 grave markers.  It must be beautiful.  Most importantly, those grave markers represent men and women from every state, every branch of the service, every race and every religion that makes up our great union. There are Christian crosses next to Muslim crescents next to Jewish Stars of David everywhere you look in Arlington National.  Yet, there is no division or partisanship or tribalism on that field of honor.  The dead at Arlington rest as they lived: different but the same in their commitment to our American ideals, from diverse backgrounds but united to protect those ideals.  We should all take a lesson from those everyday Americans.  Every one of them died knowing that freedom for all of us matters more than any one of us.  Every one of them placed their duty as Americans above themselves.  It is right that we remember them here today.

The service I attended at Arlington National Cemetery was for one of those everyday American heroes – Sergeant John Spagnoli of Queens, New York.  Like the many Rye citizens whose names you will hear when the Roll of Honor is read in a few minutes, Sgt. Spagnoli was a member of the “Greatest Generation.”  He was the father of a good friend of mine.  Sgt. Spagnoli earned a Bronze Star for courage in combat in April 1945 when he rescued a wounded member of his unit under intense enemy fire in a firefight in Germany just a few months before the war ended.  I knew Mr. Spagnoli for many years but he never once mentioned his Bronze Star or his heroism to me.  I found out about it at his service.  Mr. Spagnoli would have been embarrassed to talk about it.  Like the other members of the Greatest Generation, they didn’t think about themselves – they thought about being part of something bigger than themselves – they did the right thing just because it was the American way.

That phrase, “the Greatest Generation” was coined by former NBC News anchor Tom Brokaw and he wrote a great book about WWII veterans bearing that title a few years ago.  Read it if you haven’t, it’s excellent.  The Greatest Generation is an entire generation of regular everyday Americans who understood the concepts of duty, honor and country and did their duty when their nation and the world needed them.  Those young men and women went off to war by the train load and ship load to serve in hellish places like Guadalcanal, Saipan and Tarawa in the South Pacific, the Hurtgen Forest, Anzio and Normandy in Europe and Tobruk, the Kasserine Pass and Tunis in North Africa.  As a result, thousands of our best young people died on fields of honor in those far off lands.

We lost one our own members of the Greatest Generation, Rye American Legion member and local florist Dante Rich, back in March of this year.  Mr. Rich was a 1940 graduate of Rye High and served in the European theater in WWII as a ball turret gunner on a B-17 bomber.  It took incredible courage to be a ball turret gunner on a B-17 because you were a threat to the German fighter planes so they targeted you first when attacking the slow moving bombers.  Imagine hanging from the bottom of a big B-17 bomber in a glass bubble at 10,000 or 15,000 feet and seeing a group of German fighters come into view below.  On about his 10 mission, Mr. Rich’s B-17 was hit by enemy fire and was forced to crash land in a farmer’s field. With the help of Allied Resistance fighters, Mr. Rich made it back to friendly lines and eventually came home to Rye.

Many other Rye men weren’t as fortunate as Mr. Rich.  Listen for their names when the Roll of Honor is read today and let them soak into your soul.  They are the citizens of Rye who died on other fields of honor in faraway places.  They are the Rye High School classmates of men like Dante Rich and Ed Dempsey who didn’t make it back home to Rye.  That’s why we’re here today.

Not to mourn and be sad, but to celebrate the courage and self-sacrifice of the brave men and women who lived and died for the greater good.  As General George S. Patton, Jr. said in a speech in Boston in June of 1945, about a month after Nazi Germany had surrendered and the war in Europe had been won, when asked about all of the soldiers who had died in WWII: “It is foolish and wrong to mourn the men who died.  Rather, we should thank God that such men lived!”   Today, we are thankful that all of the men of Rye on our Roll of Honor lived!

So, in conclusion, let’s each of us decide here today that we will follow the example of the men and women laid to rest in Arlington as well as the example of the Rye men on our own Roll of Honor who gave their lives for us and let’s choose to be more like them: more selfless, more unified and more willing to sacrifice.

We are at a crossroads in our Country right now but those who have gone before us have set the example for us to follow.  It is up to us now to move forward.  Let’s choose to go down the high road that they have cleared for us through their sacrifice.  Let’s choose to work together to make our neighborhoods, our city, our county, our state and our country better today than they were yesterday.  Let’s answer the call of duty, as they did, whether it means serving others, turning out to vote, being better parents, a better neighbor, a better student, a better volunteer, a better elected representative or just a plain old better human being.  If we do, those who made the ultimate sacrifice will not have died in vain in those faraway places.  If we do, we will truly honor their memories on this Memorial Day.

May God bless those who have made the ultimate sacrifice, you and your families, the City of Rye and may God bless America!  Thank you. 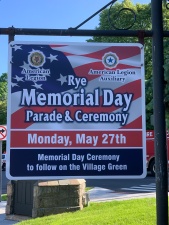 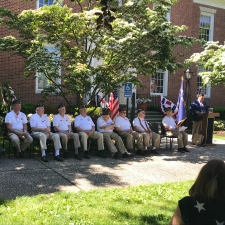 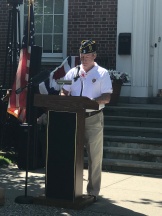